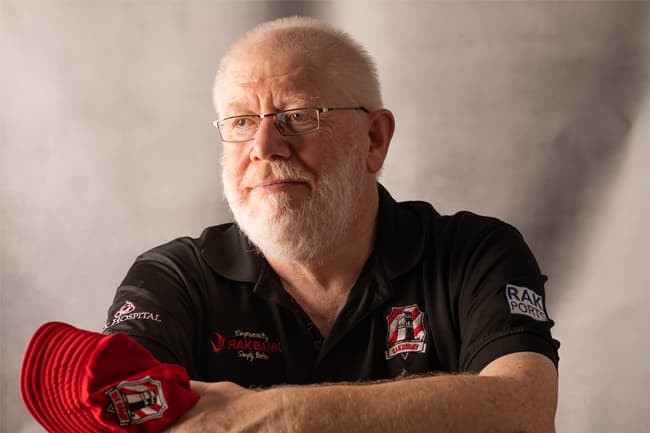 RAK Rugby have recently announced the election of David Learman as their new Chairman.

Learman brings a wealth of rugby experience to the role both as a former player (in the UK) and Club Secretary for the past eight years. He takes over from out-going Chairman – Eddie Presch.

“I’m honoured to be elected Chairman of RAK Rugby – a club close to my heart since I joined in 2014. I’m in no doubt I have some big shoes to fill. Building on the legacy of my predecessors and continuing the development of the club will be no easy task. Over the coming weeks we will be launching new initiatives and social activities offering sport and fun for all. My aim is to bring the club to the heart of the RAK community and our community to the heart of the club.“

“Over the coming season, we will focus on promoting and enrolling increased participation in the RAK Raptors – our popular Mini and Youth development programme – led by Willem Smit. At the beginning of October, we will kick-start weekly Touch Rugby sessions under the management of Ian Wilson, our newly appointed Director of Touch Rugby. This new initiative is aimed at fitness-minded individuals who prefer not to play contact rugby. I would like to think, by mid-season we’ll be in the position to field a competitive Touch Rugby team.“

“We are committed to our patron, His Highness Sheikh Saud bin Saqr Al Qasimis, Ruler of Ras Al Khaimah, to develop and promote sports activities for the benefit of the youth and population of the emirate. Although competitive contact rugby will always be at the core of RAK Rugby, I firmly believe the club cannot thrive without diversification and the engagement of Emirati and Expat members of our community. I plan to invest time, effort and with the support of our sponsors, funds, to encourage the participation of all in our safe and fun sports activities – regardless of nationality, gender, age and ability.“

Supporting Learman, the club have also announced the return of veteran member Galvin McKechnie as Vice Chairman and the retention of Altaf Sarangi as Treasurer and custodian of the club’s finances and Paul Clark as Facilities Manager.

Joining the back office team is newly elected Social Secretary Sheikh Shezan, who hopes to make an impact with a calendar full of social events and activities scheduled throughout the 2022 season and Hannah Joao who will manage the Club’s social media and communications.